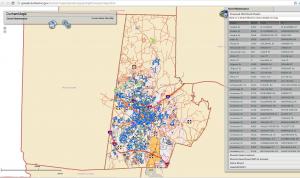 The City of Durham Department of Public Works has provided cutting edge project communication by integrating GIS with Project Controls software (Oracle Primavera) in order to provide open visibility to citizens, government officials, project team members and other outside interested parties. The City took several years to prepare and stage the data with coordination in engineering, contract management and technology. The resulting effort is a real-time application called Operation Green Light - Durham Street Repaving Progress. The system allows users to track when their street will be (or was) repaved by quickly zooming in on the area of interest and highlighting the street in question. Other navigation capabilities include sorting by planned or in process project and the ability to search by typing in your street name. In addition, the interactive query-based web application shows all of the streets in the City, whether they are maintained by the City or the North Carolina Department of Transportation (NCDOT), and their repaving schedule and status. The status is routinely updated weekly; however, the data could be refreshed instantly, and many times during a day if that proved to be necessary.

This has also led to the establishment of project expense data warehouse (DataMart) which among other attributes has keys which point to the various GIS feature classes depending on the type of infrastructure project. The structure of the DataMart was designed in such a way to allow it to be used to identify geospatial trends in the frequency and type of repairs that are being performed on the City streets. Durham is bisected by an ancient geologic feature known as the Triassic Basin which has soils with poor structural characteristics. This is one of the geospatial features of interest when looking for trends, along with year constructed, average daily vehicle counts, the initial pavement construction standards, bus routes and so on.

This objectives covered in this Webinar include: