Hatzel & Buehler’s previous software system was developed in the 1980s and had been ineffectively modified and patched to the point that it was not stable or helpful for the company’s business. The team was spending the majority of its time dealing with error messages and trying to make the system work for them. That meant construction-focused work was not getting done.

“Rather than moving the company forward into new areas or new compliance reporting, we were spending days just fixing things. So, that was a huge pain point,” said Hatzel & Buehler’s financial systems manager, Lorraine Stevens. “We had nine branches at the time. We had a full set of software programs as well as files for all nine branches. So, when we made an upgrade, we had to reconcile all those different programs and then bring that and consolidate it back into one management report or set of management reports for the people here at the corporate office. It was really very difficult to keep things separate, but yet combine them [for reporting purposes].”

The outdated software made it difficult to do the work they needed within the system. “We were using Excel for an awful lot of things,” Stevens said, “which meant that management didn’t have access to that information. Our billing was completely done in Excel. They would enter the bill in receivables manually. But the detail of the billing was on Excel.”

Hatzel & Buehler also experienced challenges keeping all nine of its branch offices connected to the same software. Because each was on different on-prem instances of the software, it was difficult to communicate between branches. “When you have nine branch offices trying to get to the software and you’re relying on the internet at this location or the power at this location, that can be a pain,” said Rob Conrad, Hatzel & Buehler’s IT director.

"Spectrum really allows us to work smarter. The ability to drill into information and get down to the details from the 30,000-foot view on the job overview all the way down to an image of the invoice that was entered is invaluable to us."

In 2014, Hatzel & Buehler decided it needed to upgrade its software and began an extensive search to find the right solution that could solve business problems and improve the company’s processes. The evaluation process took the company a year and a half. “We wanted to find a partner,” said Business Analyst, Colleen Ward. “We weren’t looking for a vendor. We needed someone we could build a relationship with just like we do with our customers.”

The team at Hatzel & Buehler met internally for months, to make sure they were all clear on exactly what they needed in this new solution. “We even created a vision statement about providing the right tools to the right people at the right time,” Ward said.

After their evaluation process, Hatzel & Buehler unanimously decided to go with Spectrum, confident it would not only fit their business needs, but also the desire to have a partner in the construction technology business. According to Ward, “What we really liked about Spectrum was that it was a complete package. It was the accounting software along with project management. So, we were going to be able to put everything in one place, which was something that we didn’t have previously.”

Hatzel & Buehler’s IT department was also on board with selecting Spectrum due to the ability to run the software in the cloud. “To me, from an IT perspective, the two biggest things that appealed to me were the web interface, which means we can run it on any client we want. And the fact that it could be hosted in the cloud,” Conrad said.

Ward added, “We wanted a cloud-based solution. And we did immediately go with cloud hosting to allow for our people in the field to have access at all times.”

"For Hatzel and Buehler, utilizing the cloud was basically a no-brainer — project managers and foremen could be sitting on the job site where all they may have for internet is a hotspot on their phone. As long as they fire up that hotspot, they can now get to the application."

The Spectrum implementation went smoothly for Hatzel & Buehler, to the delight of the company’s leadership. “I’ve been involved in other implementations that didn’t go quite as well as this one,” Stevens said. “If you think about the fact we had nine different sets of files that we had to bring in to one file and coordinate all those differences into a cohesive whole — it really went well, considering.”

Right away the new solution fixed the company’s billing, reporting and collaboration problems. “We brought all that in-house into Spectrum now as a more comprehensive unit so that management has the reporting information that they need — and our bills look nicer. We now look more cohesive across the company as well,” Stevens said.

Stevens said the company found that Spectrum has “a very easy-to-use and very logically oriented database. So that we’ve been able to find the pieces that we need for the reporting and we can provide those reports that management needs that Spectrum doesn’t already have in it.”

Added Ward: “We are able to create any report that we want, get the data out of Spectrum without any problems. Spectrum really opened up the collaboration between our office and our field and got rid of our siloes. There’s no more double entry of change requests and committed costs.”

“Spectrum really allows us to work smarter,” Ward said. “The ability to drill into information and get down to the details from the 30,000-foot view on the job overview all the way down to an image of the invoice that was entered is invaluable to us.”

The added layers of business intelligence that Spectrum provides is also transforming how the company operates. “Being able to use business intelligence to analyze your data is a tremendous help,” Conrad said. The improved data and reporting capabilities have helped the field employees as well. Conrad shared that “…now the project manager using Spectrum while sitting in a construction office, can look at his job, pull up his numbers and see how the job is running. He can now see material coming to the job and see what all of his costs are. It allows him to better manage that job rather than go back to the office, read reports and try to analyze it. It’s all in front of him now.”

"Spectrum really opened up the collaboration between our office and our field and got rid of our siloes."

Conrad said moving to Spectrum on the cloud was a great move for the company. “For Hatzel and Buehler, utilizing the cloud was basically a no-brainer,” he said. The cloud has really benefited us since the majority of our users are mobile. The project managers and foremen … it makes their job easier to be able to get to the application via the cloud rather than trying to worry about how to connect to the corporate office to access those applications. They could be sitting on the job site where all they may have for internet is a hotspot on their phone. As long as they fire up that hotspot, they can now get to the application.”

The company’s HR and Service Management departments benefited from the Spectrum implementation as well. Hatzel & Buehler, a union contractor, did not have a dedicated HR department and it was difficult for the company to perform traditional HR functions like safety training and documentation or time-off requests. “Spectrum has really given us [an] HR [department],” said Ward. “We’re now able to manage vacation schedules and personnel files for 10 offices that are scattered throughout without a bunch of paperwork.”

Hatzel & Buehler is also using Spectrum’s Service Tech solution to help streamline the company’s service processes, specifically with work order functionality for technicians in the field. “It is helping us with productivity and profitability,” Ward said. “From a productivity standpoint, they record their information, they send the work order, tick it in and it’s completed. There’s no more going back and taking time to record everything again so that it can be sent to the office. So, we’ve hopefully eliminated all of the little notebooks that all the foremen were keeping in their pockets with scribbles of their day-to-day activities that they would try to decipher at the end of the week.”

She went on, “and from a profitability standpoint, [there is] the timeliness of the revenue — to be able to bill two or three weeks quicker than we could, as opposed to waiting for paper. We can get that service ticket signed in the field on the iPad and we can get the bill out the same or the next day.” 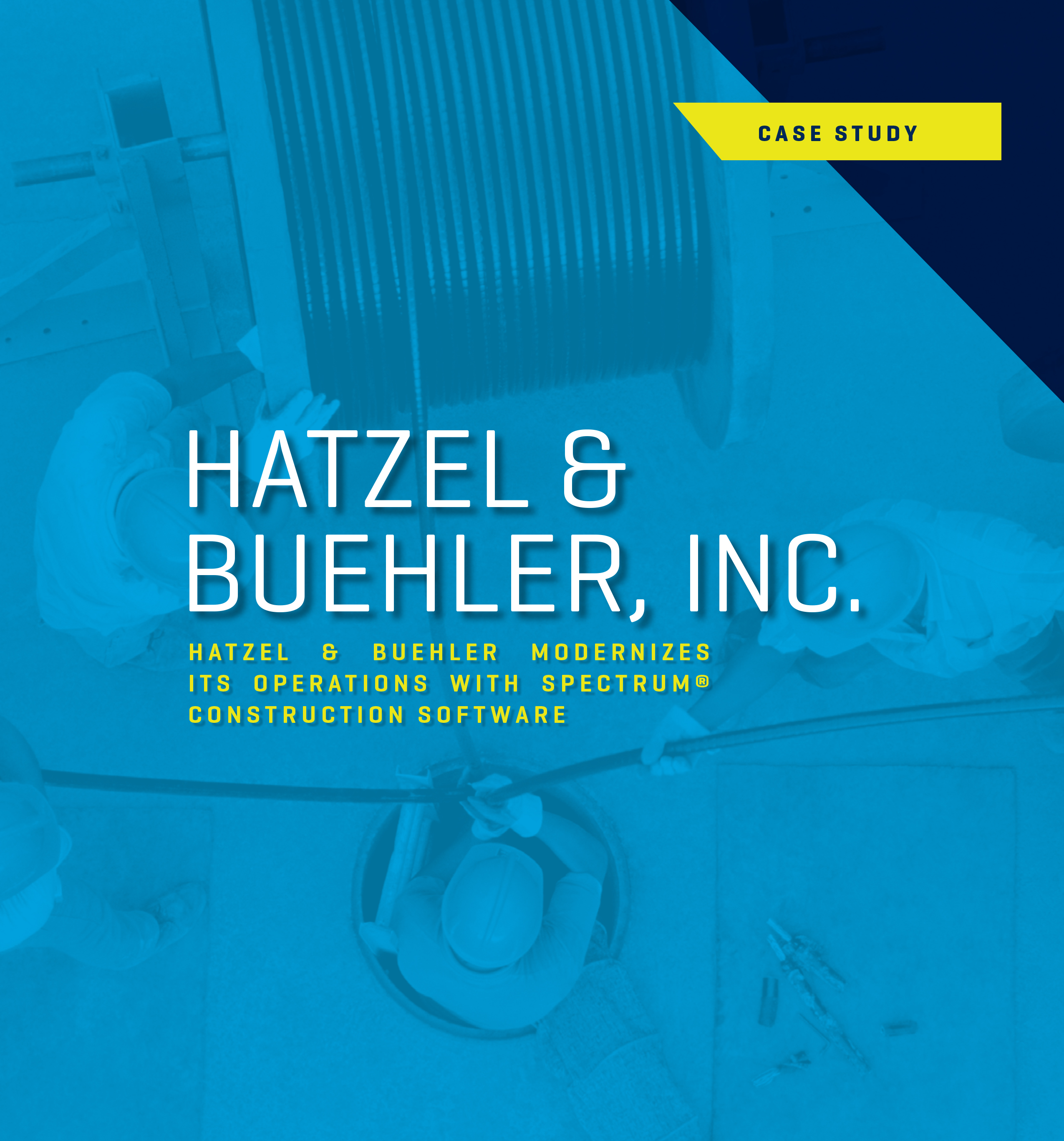