At 2,104 feet, North Mountain is one of the Phoenix metropolitan area’s most recognizable landmarks and busiest hiking destinations. It’s also home to several aging transmission towers which, since 1965, have served as central hubs for the city’s wireless and fire VHF networks. When the existing towers could not safely support new equipment while also complying with loading standards, the city made plans to construct a new 120-ft-high tower at the mountain’s summit. However, there was one big problem that had to be addressed before construction on the new tower could begin...

North Mountain is one of the Phoenix metropolitan area’s most recognizable landmarks and busiest hiking destinations. It’s also home to several aging transmission towers which, since 1965, have served as central hubs for the city’s wireless and fire VHF networks. When the existing towers could not safely support new equipment while also complying with loading standards, the city made plans to construct a new 120-ft-high tower at the mountain’s summit. However, there was one big problem that had to be addressed before construction on the new tower could begin.

Known as “The Widow Maker” for its blind spots and steep grades, the access road leading to the construction site was in disrepair. Further complicating the project’s safety considerations was the 200,000 pound crane needed to erect the tower, which the access road wasn’t wide enough to accommodate. The city tasked Hunter Contracting , a heavy civil construction company based in Gilbert, Ariz., with renovating and extending the 4,400 ft winding road, making it safe to travel and ensuring there would be enough surface area to accommodate the crane.

The access road’s 23-percent grades, blind curves and steep drop-offs presented challenges that impacted nearly every aspect of its reconstruction and extension. Sean Osborne, a project engineer at Hunter Contracting, recalls how working on a one-lane access road required precise coordination across sub-contractors and project teams. “The narrow road limited locations for material storage and could only accommodate traffic in one direction, so we had to coordinate movement of equipment and crews going up or down the mountain in advance to ensure safety and passage without interrupting work in progress.”

A speed limit of five miles per hour was established and a mandatory spotter put in place for all concrete and haul trucks. Additionally, crews were required to make eye contact with an equipment operator before passing. “The original concrete supplier’s safety lead was unwilling to have its drivers haul material up the mountain,” Osborne said. “A second supplier, who was willing to do the work, hand-selected drivers with enough experience to safely drive the trucks up the mountain.” Additionally, a controlled-access zone was maintained three feet from the edge of the mountainside.

During construction, the project team faced the risk of falling boulders, some as large as automobiles. “Our crews monitored the terrain and, in one instance, discovered a 12-foot-tall boulder that had delaminated two feet from the mountainside, meaning that it could fall at any time,” Osborne said. “Fortunately, we cleared the area and dislodged the boulder without incident.”

The terrain also created safety risks and obstacles to overcome when installing the shotcrete drainage outlets that would direct rainwater along the road’s switchbacks. “There isn’t a piece of equipment that can grade and spray the concrete on the side of the mountain,” Obsorne said. “To create the outlets, we had to rent an 85-foot-tall manlift. Our crews were literally hanging off the side of the mountain, tied off to a water truck and using a fire hose to grade the mountain.”

The project’s most unexpected challenge involved a subcontractor who designed the wall system on a previous City of Phoenix project and was selected to design and build custom retaining walls along the roadway. This subcontractor repeatedly refused to follow established safety protocols during construction, requiring Hunter Contracting to enforce progressive disciplinary action. Further complicating the situation, the subcontractor’s wall system was built with proprietary blocks, making termination problematic.

With safety as a top priority, the decision was made to terminate the subcontract. “The legal challenges associated with taking over work on a proprietary product and diverting our crews to perform the subcontractor’s work required extra documentation and created new obstacles to overcome,” Osborne said. “Our crews observed how the subcontractor constructed the walls and through that observation and supplemental research, not only completed the wall, but also rebuilt and raised the portion of wall that was already built. We safely constructed the wall as it was originally designed and with higher quality. With the unexpected addition of taking on the subcontractor’s work, as well as rework from a storm that washed out most of the subgrade prior to paving, we still completed the project on schedule and within budget.”

With the road wide enough to safely accommodate the crane, the team began pioneering a road for the last 200 feet of unpaved access road and creating a staging area for the crane while the pad was under construction. Once work concluded, crews moved the crane into position on the pad. A forklift delivered tower pieces to the crane, and it was successfully erected, meeting the loading requirements needed to house new, heavier equipment. Additionally, the improved access road is a safer environment for repair personnel and others headed up the mountain, including the many hikers who visit the trail each year.

How Spectrum Delivered Real-Time Data to Keep the Project Moving

Completing a project of this size and complexity requires accurately and efficiently collecting data in real-time, which is one reason construction companies like Hunter Contracting have moved to fully connected, cloud-based construction management platforms, such as Trimble Viewpoint's Spectrum.

By digitizing daily logs, site inspections, materials delivery and other daily site information, Hunter Contracting’s office and field crews can communicate and collaborate with real-time data, reducing unnecessary costs and giving project managers insight into potential problems that can lead to costly delays. “Comparing planned versus actual production in Spectrum allowed us to spot potential problems with the drainage channel,” Osborne said. “The data revealed that continuing at the current production pace would cause us to lose nearly $50,000. With this insight, we were able to dig deeper and determine that the concrete trucks were taking too long to get to the site because they were taking turns driving up and down the mountain. To solve the problem, we created staging areas that allowed trucks to pull over when needed and as a result, increased from one to four trucks on the mountain at the same time.”

“Looking at the data in Spectrum, we can find opportunities to work more efficiently on future projects and better understand what we’re capable of delivering and within which budget and timeframe,” Osborne said. “It’s easy for our estimating team to run a report across similar projects and see how we perform on a certain type of work.”

While many companies already do some version of this, having more complete and relevant data can provide a fuller picture of how jobs fare and where improvements can be made. Furthermore, analyzing that construction data with modern business intelligence tools also ensures bids are more accurate for future projects, while the increased efficiencies and on-time, on-budget delivery of projects leads to a solid reputation and helps land more work.

Taking advantage of data and building reliable, productive workflows requires a connected construction management suite that provides a single source of real time data across contractors’ people, projects and processes. With a better understanding of accurate construction data, contractors can make actionable financial business decisions in real-time, on both current projects and for future work. 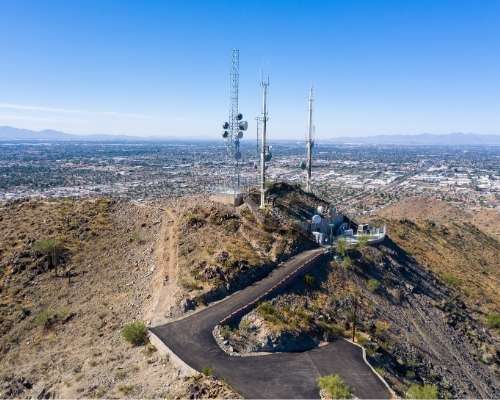 North Mountain, in the Phoenix metro area, is both a popular recreation area and an ideal location for television and radio towers, but was treacherous to ascend. 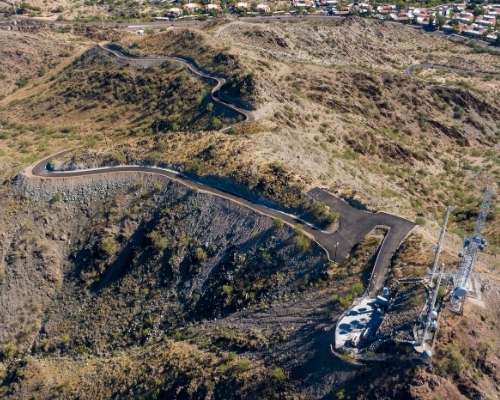 This overhead view of the mountain shows gives an idea of some of the construction challenges Hunter Contracting faced. 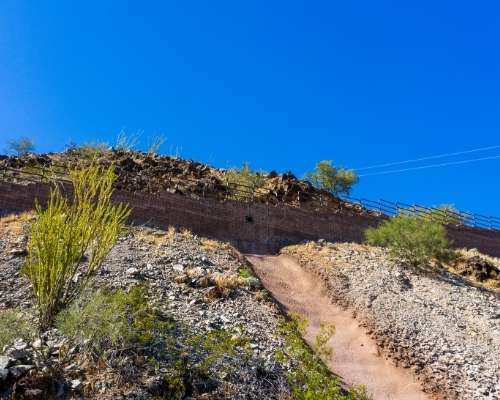 Correctly building new retaining walls to ensure they'll last was a priority on the project.